Keep up with your busy schedule. From ID badges to classroom charts, roll film lets you tackle more laminating projects at one time.

What is Roll Laminating Film?

When you’re on a roll, you don’t want to stop or slow down! Laminating film lets you run several documents through your laminator without needing to stop the machine. But what exactly is the film made out of?

Let’s get technical. Laminating film is made of a base film, such as polyester or PVC, and is then coated with an adhesive. Adhesives can be activated either by thermal heat or by high-pressure. This coated film is wound around a cardboard core, which is loaded into your roll laminator.

Generally, roll laminators use sets of two rolls – one on top and one on bottom. Your documents are fed in between these two rolls and the laminator uses heat and/or pressure to activate the adhesive, creating your laminated document.

Roll films can cover a wide variety of projects. Whether you’re laminating odd sized documents, like alphabet letters, or wide graphics, such as a window sign, there's the right film for you.

When selecting roll film, first think about the size of your laminator. Roll widths can vary between 12 inches and 64 inches. Make sure the size will fit in your machine.

Next, consider how flexible you want your laminated items to be. Mil thickness can range from 1.5 mil up to 10 mil. The higher the mil number, the more rigid your final document will become.

Finally, think about the finish on your laminated documents. Do you want glossy or matte items? Should they have a luster or textured quality? These decisions will help guide you through selecting the best film for your project.

NAP I is standard type laminating film that is activated at 290F, while NAP II is a low temp film that activates at 230F. Learn more about the differences and the uses for each film type on our laminating film comparison page.

Create quality results with either thermal or pressure-sensitive film. Both can form lasting protective bonds around your documents. The main differences depend on the document you want to laminate and the type of roll laminator you are using. Some documents may be sensitive to heat, which would make pressure-sensitive lamination your best choice, while some laminators may only support one type of film. 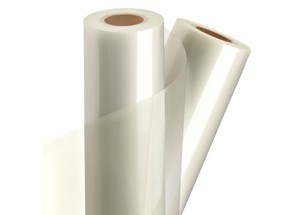 Make sure your finished documents stay protected – you don’t want them falling apart or fading fast. Thermal laminating film gives your projects a lasting bond and professional finish. When processed through a heated roll laminator, the adhesive on the thermal roll film becomes sticky, creating a strong, protective seal over your documents. Choose different rigidities and finishes to fully customize your laminating projects.

Not feeling the heat? No need to worry – you can still laminate with pressure-sensitive film. Pressure-sensitive films do not require heat to activate the adhesive. Instead, they use pressure to create a strong bond between the laminating film and the document being laminated. Sometimes during the lamination process, a release liner is slowly pulled away from the laminating film as it is applied to your document. On some machines a take up/rewind kit may be required as part of this process.